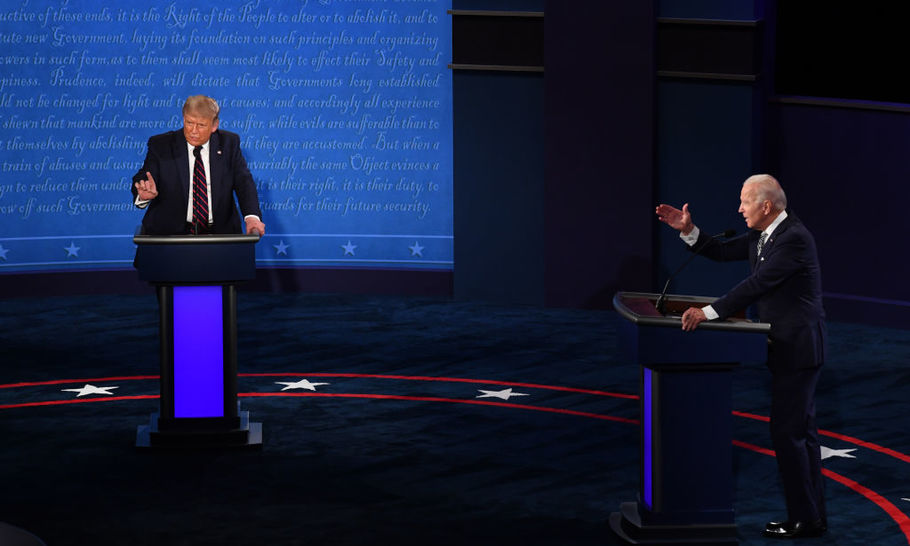 The first Trump-Biden encounter of the presidential campaign was the most unpresidential spectacle of its kind that anyone can remember. It was less a TV debate than a shouting match. Yet the very fact that it was so unedifying tells us something about America. This is a society close to boiling point. Unless both sides draw back from the brink, they are heading for bloodshed.

The United States has never looked as disunited as it does today. During the Second World War, Roosevelt famously called his country “the arsenal of democracy”. Nobody imagined that the arsenal might one day be raided by fanatics of Left and Right, with guns in their hands and hatred in their hearts

Donald Trump should be ashamed of himself for telling the Proud Boys, a far-Right group, to “stand down and stand by”. Stand by for what, exactly? If he loses the election, is he planning to unleash white suprematists on the streets of American cities? Standing by his claim, still unsubstantiated, that this election will be rigged by the Democrats using fake postal ballots, Trump issued the vague but ominous threat: “This will not end well.” What kind of President stirs up fear and rage like this? A President, perhaps, who is trailing by seven points in the polls and feels he has nothing to lose? Trump’s motto now appears to be: Après moi, le déluge. (Not that he would understand either the sense or the sentiment, let alone have heard of Madame de Pompadour.)

Yet Joe Biden, too, has much to answer for. Why did he refuse to condemn the equally violent bully boys who go under the banner of Antifa? To insist, as he did, that “Antifa isn’t an organisation, it’s an idea” amounts to a whitewash — no, a justification — of the mobs who have terrorised urban America for months. Biden claims that he, not his far-Left rival Bernie Sanders, “is” the Democratic Party. Well, in that case, he has a duty to take responsibility for those who create mayhem in his name. But no unequivocal condemnation was forthcoming. He accused Trump of “pouring gasoline on the flames” — but Biden himself must call off his attack dogs if he is to present himself as a peacemaker.

There was certainly nothing pacific about the tone adopted by either candidate. Trump hectored and interrupted throughout, attempting to provoke, rile or confuse his opponent. An exasperated Biden replied: “Will you shut up, man.” It was not a question, but a command. This was a former Vice-President addressing a sitting President.

The point has already been widely made that Trump lost because he failed to steamroller his challenger. This may be true, but there is a deeper, more disturbing point about the ugly tone adopted by both men. In 2016, Trump supporters felt disrespected by Hillary Clinton when she implied that they were “deplorable”. They adopted the word as a badge of honour. This time, Biden is treating “their” President as though he were illegitimate. The Democrat calls Trump a “racist”, a “liar”, a “fool” and a “clown”. Such a crude vocabulary implies that he thinks Trump voters are all of these things, too. In Biden’s refusal to accord Trump the courtesy due to the office of President, these voters will hear the voice of the liberal establishment, dripping with contempt for them and all that they stand for. That will embitter them even more than Trump’s own conduct, however unworthy that may be.

Trump is even more likely to lose today than he was yesterday. To that extent, this debate was a victory for Biden. But it may prove to be a Pyrrhic victory. The Democrat scotched the rumour that he was senile. He survived the mud-wrestling. He gave as good as he got. Yet Biden debased his own brand by getting down in the dirt. To call Trump “the worst President we have ever had” was an insult to the intelligence of tens of millions of the poorest Americans, especially those of colour, who are actually better off than they were under the Obama Administration in which Biden served.

There was little or no debate about policy, foreign or domestic, and hardly any new information about what either candidate proposes to do about the present crisis: the Covid-19 pandemic and its accompanying recession. For that, we must await the remaining two debates. But time is running out for both men to lower the temperature. If America descends further into open conflict on the streets, neither Trump nor Biden will be forgiven. As if a pandemic that has already cost more than 200,000 lives were not enough to overshadow America, the spectre of civil war hovers over this election campaign. It would be child’s play for the two rivals to banish the fear of violence by shaking hands and appealing to their supporters to calm down. After the bluster and rancour on display last night, however, it is hard to imagine either Trump or Biden being man enough to reach for the olive branch rather than the baseball bat.