‘The entire World is at stake’: Trump pitches himself to head up negotiations between Ukraine and Russia 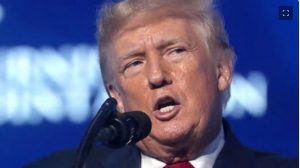 Donald Trump proposed himself as the solution to the war in Ukraine after apparent explosions damaged the Nord Stream pipelines.

European leaders say the leaks are likely the result of sabotage, which Trump has blamed on the U.S. and Russia has blamed on Ukraine, and the former president offered to lead negotiations to wind down the Kremlin’s invasion of its neighbor — whose president he was impeached for trying to extort.

“Everyone is talking about the big hurricane barreling into Florida, as they should be,” Trump posted early Wednesday morning, “but perhaps a far more important event in the longer term was the announcement that the Nord Stream I & II Pipelines out of Russia (which I brought to the World’s attention as President when I explained how crippling reliance on it could be for Germany and other parts of Europe. Everybody laughed at the time, but they are not laughing anymore!) has been SABOTAGED. This could lead to major escalation, or War!”

“U.S. ‘Leadership’ should remain ‘cool, calm, and dry’ on the SABOTAGE of the Nord Stream Pipelines,” Trump added. “This is a big event that should not entail a big solution, at least not yet. The Russia/Ukraine catastrophe should NEVER have happened, and would definitely not have happened if I were President. Do not make matters worse with the pipeline blowup. Be strategic, be smart (brilliant!), get a negotiated deal done NOW. Both sides need and want it. The entire World is at stake. I will head up group???”

The pipelines have been at the center of geopolitical tensions in recent months as Russia cut gas supplies to Europe in suspected retaliation against Western sanctions following its invasion of Ukraine.

While the pipelines, which are operated by a consortium majority-owned by Russian gas giant Gazprom, are not currently in operation, they both still contain gas but the environmental impact appeared limited so far.

A leak was first reported on Nord Stream 2 on Monday.

“Authorities have now been informed that there have been another two leaks on Nord Stream 1, which likewise is not in operation but contains gas,” Danish climate and energy minister Dan Jorgensen told AFP in a statement on Tuesday.

“It is too early to say anything about the causes of the incidents,” the Danish Ministry of Climate, Energy and Utilities said in a statement.

Denmark’s energy agency has, however, called for “higher levels of preparedness in the electricity and gas sector” in the country, Jorgensen said.

Russia said it was “extremely concerned” about the situation.

Asked by reporters whether it could be an act of sabotage, Kremlin spokesman Dmitry Peskov said that at the moment “it is impossible to exclude any options”.

With additional reporting by AFP