President Biden responded to a heckler while delivering remarks in Milwaukee on Monday, saying, “Everybody’s entitled to be an idiot.” 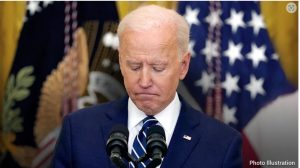 Biden traveled to Wisconsin on Labor Day to deliver a speech at Milwaukee Laborfest, where he spoke about his support for unions and lauded Democratic legislative victories such as last year’s coronavirus relief package and a bill to invest in domestic semiconductor manufacturing that he signed into law last month.

At one point, someone in the audience could be heard trying to disrupt the speech.

“No, no, no, don’t — let him go. He’s, look, everybody’s entitled to be an idiot,” Biden said. It was not immediately clear what prompted the heckling or what the person was saying.

“They’re entitled to be outrageous. This is a democracy,” Biden said during that speech, also saying, “Good manners is nothing they’ve ever suffered from.”