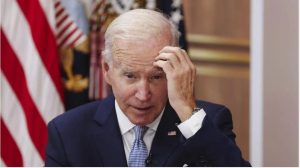 President Biden’s fiery speech in Philadelphia denouncing former President Donald Trump and what he described as “extreme MAGA ideology” has sparked online calls for violence, including death threats against the president, according to documents obtained by Yahoo News.

Biden’s remarks also prompted immediate concerns from senior counterterrorism officials who said they fear that calling Trump supporters extremists would be viewed as a call to arms and would only inflame an already volatile threat environment.

“Too much of what’s happening in our country today is not normal,” Biden said Thursday night at Independence Hall, flanked by two U.S. Marines. “Donald Trump and the MAGA Republicans represent an extremism that threatens the very foundations of our republic.”

By Friday afternoon, posts on forums popular among white supremacists and far-right extremists called for the assassination of Biden, and named Jewish administration officials including Attorney General Merrick Garland, Treasury Secretary Janet Yellen and Secretary Alejandro Mayorkas as potential targets. Declarations of civil war were also appearing, according to documents detailing some of the threats.

“On Gab, one user posted a series of violent threats accusing Biden of stealing the election,” according to a threat alert from Site Intelligence Group sent to law enforcement agencies and others on Friday. Trump and many of his supporters have long claimed, without evidence, that the 2020 presidential election won by Biden was stolen from Trump due to widespread voter fraud.

“Users on several far-right and ultranationalist venues made violent threats against President Joe Biden following his speech addressing political extremism on September 1, 2022,” said one of the alerts. “Users advocated for Biden to be murdered and predicted violence if he continues speaking about the topic.”

Amid criticism, the White House has defended Biden’s language, saying that the president is standing up for democracy and denouncing political violence. On Wednesday, press secretary Karine Jean-Pierre singled out specific Republicans who’ve espoused extremist rhetoric.

“I fear he is lighting a fuse that is not going to go well,” one senior Biden counterterrorism official said. “Sadly this is not a united speech but a very divisive one.”

On Friday, this official said their fears appear to have been confirmed by what they described as an uptick in threats of potential violence. A different counterterrorism official said they were concerned that fringe right-wing and extremist groups will use Biden’s speech to recruit and fundraise, potentially increasing the longer-term threat from these groups.

The officials requested anonymity because they are not authorized to speak to the media. Some said they also didn’t want to be seen as criticizing the president. The Department of Homeland Security referred Yahoo News’ request for comment to the White House National Security Council.

“The president provided a powerful portrayal of the complex dynamic and dangerous threat environment currently facing the U.S., a threat environment fueled by the conspiracy theories and other extremist content that is pervasive across the online and media ecosystem,” said Cohen, former acting undersecretary for intelligence at DHS and currently an adjunct professor at Georgetown University.

“I am concerned, however, that his words will be used by America’s adversaries to incite attacks by those who believe that violence is an acceptable way to express one’s political or ideological beliefs,” he said. Cohen added that online calls for violence were extensive prior to the speech, but appear to be on the rise.

In a statement to Yahoo News on Friday, the White House said that the calls for violence following Biden’s speech illustrate the threat the president described.

“The President’s message couldn’t have been more clear: there is no place in our democracy for political violence,” the statement said. “None. And that some of the more extreme elements in our society are now calling for more violence only proves the very point of his speech … that we are in a dangerous moment right now, a moment where simply stating the truth about the fragility of our democracy brings out the worst instincts of those who want to tear it apart. The President was right to call them out. The bigger risk to the body politic would have been to remain silent in the face of such a threat.”

Some Republicans and former Trump administration officials have been critical of Biden’s strong rhetoric, accusing the president of being divisive.

“I don’t understand how Joe Biden is so angry when his party controls the House, the Senate and the White House,” Richard Grenell, acting director of National Intelligence during the Trump administration, told Yahoo News on Friday. “He should be telling America how great the country is under his leadership and instead he’s attacking Republicans.”

On Friday, Biden defended his remarks, noting that he does not believe all Trump supporters are a threat to the country.

“I do think anyone who calls for the use of violence, fails to condemn violence when it is used, refuses to acknowledge when an election has been won, insists upon changing the way that … you count votes, that is a threat to democracy, to democracy and everything we stand for,” he said on Friday.

The FBI declined to comment on Biden’s speech but told Yahoo News:

“The FBI takes all threats seriously. We work closely with our local law enforcement partners to assess and respond to threats to keep our community safe. As always, we would like to remind members of the public that if they observe anything suspicious to report it to law enforcement immediately.”