Nuclear threats and what they mean for the Doomsday Clock 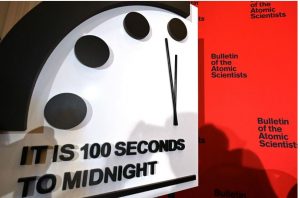 LONDON — In January, the leaders of the Bulletin of the Atomic Scientists announced, for the third year in a row, that the world was at “doom’s doorstep.” The group declared that the Doomsday Clock stood at 100 seconds to midnight — the closest the world has ever been to catastrophe since the clock was created in 1947.

But that was more than eight months ago, before Russia invaded Ukraine and before North Korea kick-started its latest provocative series of ballistic missile testing. In the past two weeks, North Korea has conducted six such launches.

“As far as the Doomsday Clock goes, it is not something that reacts to every dangerous incident or even a positive incident that happens,” Sharon Squassoni, the co-chair of the bulletin’s Science and Security Board, told Yahoo News. “It’s not just all nuclear. But certainly, there have been some really worrying developments in the last year, and most of them have to do with Russia’s invasion of Ukraine.”

On Tuesday, one of the intermediate-range ballistic missiles launched by North Korea flew over northern Japan, causing widespread panic among residents who awoke to sirens and warning messages. It was the first such missile to be launched over Japan in five years, prompting the U.S. to call a U.N. Security Council meeting.

In response, the U.S. and South Korea ran joint military drills in the region, during which a South Korean ballistic missile malfunctioned in a live-fire drill. South Korea’s military apologized the next day. Seoul officials said the Hyunmoo-2 missile carried a warhead but did not explode when it crashed. They also confirmed were no casualties.

In retaliation for the U.S. “escalating the military tensions on the Korean Peninsula,” Pyongyang on Thursday fired two short-range ballistic missiles. It came just one month after North Korea passed a law declaring itself a nuclear weapons state, a move that leader Kim Jong Un called “irreversible.”

But Squassoni said, “Clearly the North Koreans are upset about the resumption of exercises by the U.S. and the Republic of Korea, but that is not in the same category as what is happening with Russia and Ukraine.”

Meanwhile, one of Russian President Vladimir Putin’s allies, Dmitry Medvedev, renewed nuclear threats last week. Posting to Telegram, he said Western countries wouldn’t intervene even if “Russia is forced to use the most fearsome weapon against the Ukrainian regime.”

“I think it’s different than in the past, because Russia seems hellbent with some of the territories from Ukraine,” Squassoni told Yahoo News. “This is quite a strategic vision of Mr. Putin’s, however illegal it might be. But this is not like the war in Afghanistan or Syria. It’s not like any of those other conflicts of the last 20 years. And because of that, I think we have to be quite careful.”

Members of the Bulletin of the Atomic Scientists are due to meet next month to discuss the aftermath of the past year — and perhaps the clock could be moved even closer to midnight.