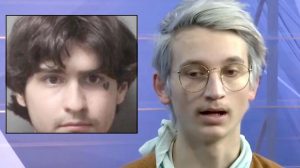 A Louisiana man admitted to trying to murder and dismember a gay man he met on the LGBT dating Grindr, according to a statement from the U.S. Attorney General.

Holden White was hospitalized with grievous wounds after he had his first date with Chance Seneca, who is now 21 years old.

White has said that he interacted with Seneca for a month without any red flags before the attack on June 20, 2020, that nearly cost him his life.

“He left the room to get something and then he came back. And when he came back he came up behind me and that’s when he wrapped a cord around my neck,” said White.

Seneca choked White so hard the blood vessels burst in his face and he passed out.

“The next thing I remember is being in the bathtub and he was slicing open my left wrist,” said White, who said he was also naked at the time.

The man faded in and out of consciousness while Seneca watched him. He said that he remembered being stabbed in the neck.

He slipped into a coma and awoke three days later in a hospital. He was told that Seneca called the police and told them he had killed a man. White had six stab wounds to the neck and his hands were nearly sawed off.

“Seneca acknowledged that he intended to murder and dismember H.W. for the purpose of satisfying his homicidal urges, and that he had planned to continue murdering until he was caught or killed,” read the statement from the Attorney General.

Seneca pled guilty to one count of kidnapping as a part of a plea agreement. He faces life in prison and is scheduled to be sentenced on January 25, 2023. He could also face hate crime charges.

White said that his mission in life was to make sure Seneca stayed behind bars to prevent him from hurting anyone else.