If you are a Republican, you are a Nazi,’ tweets Saira Rao, who previously said looking at the American flag makes her want to puke 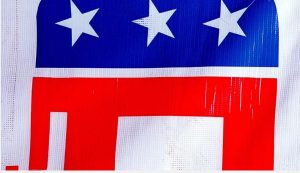 Saira Rao, who has previously said that looking at U.S. flag makes her want to puke, has claimed that all Republicans are Nazis.

Rao has a very negative opinion of the United States. She previously described America as “a racist transphobic homophobic xenophobic ableist classist Islamophobic misogynistic dumpster fire. As such, seeing the American flag makes me want to vomit,” she tweeted in June.

Rao is a coauthor of the forthcoming book, “White Women: Everything You Already Know About Your Own Racism and How to Do Better.” A book description says that the work “is a call to action to those of you who are looking to take the next steps in dismantling white supremacy. Your white supremacy. If you are in fact doing real anti-racism work, you will find few reasons to be nice, as other white people want to limit your membership in the club. If you are not ticking white people off on a regular basis, you are not doing it right.”

Rao and her coauthor Regina Jackson are the cofounders of Race2Dinner, which, among other things, offers “two hours with Regina Jackson and Saira Rao for 8 white women,” according to the Race2Dinner website. “Participants also receive pre-dinner support and post-dinner consulting with our Resident White Woman, Lisa Bond,” the site explains.

“It is wild how many folks STILL refuse to see how gun violence, climate catastrophe and poverty are directly tied to whiteness + capitalism,” Rao tweeted in June.

PS  Its people like her that have DESTROY America