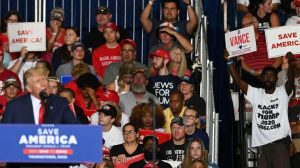 Earlier this month, Trump held a rally in Youngstown, Ohio. Near the conclusion of the rally, some Trump supporters made a one-finger gesture that was likely an endorsement of the QAnon conspiracy theory.

Trump held his latest rally in Wilmington, North Carolina. During Friday’s event, a handful of attendees made the pointing finger gesture. However, security at the Trump event are seen on video asking people to stop making the hand motion.

PBS “NewsHour” correspondent Lisa Desjardins was at Friday night’s rally, and said, “Confirmed with people at Trump rally who held 1 finger up that they meant it as a symbol of QAnon’s ‘Where We Go One We Go All’ and further… Security staff here fanned out and told people to take down their fingers. That is a reason why – maybe main reason – we saw fewer” finger gestures than in the previous rally.

“The man in this photo held up 1 finger and told me he meant it as a WWG1WGA sign – and then the security guard in the next photo told him to take it down. He was furious ‘that’s my Constitutional right!’ The man in the crowd told me after I saw that interaction happen,” Desjardins wrote on Twitter.

Desjardins said the security staff “clearly had been directed to watch for this kind of gesture and to shut it down.”

Hillary Clinton said the MAGA supporters making the finger gesture were like Adolf Hitler supporters doing the Sieg Heil salute of the Nazis.

On Friday, Clinton spoke at the Texas Tribune Festival in Austin, Texas.

Clinton said, “I remember as a young student, you know, trying to figure out, how people get basically brought in by Hitler. How did that happen? I’d watch newsreels and I’d see this guy standing up there ranting and raving, and people shouting and raising their arms. I thought, ‘What’s happened to these people? Why do they believe that?'”

She continued, “You saw the rally in Ohio the other night, Trump is there ranting and raving for more than an hour, and you have these rows of young men with their arms raised. I thought, ‘What is going on?'”

Clinton theorized, “So there is a real pressure – and I think it is fair to say we’re in a struggle between democracy and autocracy.”

Hillary Clinton likens Trump supporters to Nazis during remarks at the Texas Tribune Festival in Austin “What’s happened to these people?”

Taylor Budowich – a spokesman for Trump – blasted Clinton for “using some of the most disgusting smears imaginable.”

“It seems like perpetual-failed-candidate Hillary Clinton’s basket of deplorables has run stale, not unlike herself,” Budowich told Fox News. “It’s pathetic, it’s divisive, and it is further cementing her legacy of cringe.”

During the 2016 presidential campaign, then-candidate Hillary Clinton denigrated half of Trump’s supporters as a “basket of deplorables.”

“You know, just to be grossly generalistic, you could put half of Trump’s supporters into what I call the basket of deplorables,” Clinton said in September 2016. “The racist, sexist, homophobic, xenophobic, Islamaphobic — you name it. And unfortunately there are people like that. And he has lifted them up.”

Earlier this month, President Joe Biden proclaimed that Trump and MAGA Republicans “represent an extremism that threatens the very foundations of our republic.”

PS this is what America has come to HATE.   America is unsafe.