Greatest threats to the US, according to foreign policy experts: ‘How scared do you want to be?’ 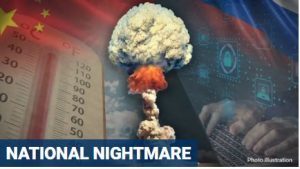 Russia, China, cybersecurity, nuclear proliferation and climate change were all highlighted as posing threats to the United States

Lawmakers and foreign policy experts weighed in on the greatest threats facing the United States, and those that may be overlooked, with a focus on China, Russia, Iran and climate change.

Sen. Joni Ernst, R-Iowa, noted that despite near-term threats like Russia’s invasion of Ukraine, the long-term threat was China.

“Through technology, through their militarization of other areas, port activities, the Belt and Road Initiative … there are so many things China will engage in as a way to move around the globe unfettered, and that, I would say, is the largest threat facing the United States right now,” Ernst told Fox News Digital at last week’s Aspen Security Forum.

China’s “Belt and Road Initiative” is the country’s infrastructure program intended to link China with more than 100 countries around the world through railroad, shipping and energy projects.

Sen. Mark Warner, D-Va., echoed Ernst’s sentiment that Russia posed an immediate threat, with China’s rise being a long-term challenge, calling competition with China around technology the “competition of this century.”

Michèle Flournoy, former Under Secretary of Defense for Policy, told Fox News Digital the greatest threat facing the United States is “the risk that authoritarian powers like Russia and China will actually use force to change international borders, to impose their will on other countries, and to also threaten the rules of the road that have protected our way of life for decades.”

Former Democratic U.S. Representative from California Jane Harman noted that what is happening inside the United States also poses a threat to the country.

“This toxic partisanship, lack of civility, inability to even try to understand where the other person is coming from, then you add guns to this, and you have a clearly explosive situation,” she told Fox News Digital. “So that is one huge threat.”

Harman also said a significant threat is that, following the Cold War, the United States “failed … to articulate a strategy for global U.S. leadership going forward.”

And while China and Russia topped the list of the greatest threat to the United States, there were others that lawmakers and national security experts said were not getting enough attention.

Ernst said the United States should pay more attention to Iran, saying the country is becoming a greater threat “not just to the United States, but also to our partners in the Middle East.”

Flournoy said climate change is a “very real threat,” adding that there is a threat for future pandemics, and the country should “do more to learn lessons from COVID to try to be better positioned to try to prevent the next pandemics.”

Flournoy also mentioned “perennial risks like terrorism and nuclear proliferation” that the United States should keep an eye on.

Harman pointed out that Biden’s foreign policy has remained focused on Europe and Asia, but China and Russia “play” in Africa and South America, and the United States should not overlook them.

As evidence of this, Harman mentioned the resolution in the UN General Assembly to condemn Russia’s invasion of Ukraine, in which 35 countries abstained from voting.

“The abstentions were from the Middle East, Africa, and Latin America,” she said. “We’d better understand that in a multi-polar world… we absolutely need support from countries in Africa and Latin America, and they are sadly still not at the top of our agenda.”

Among the countries who abstained from voting on the resolution were China, Cuba and Nicaragua. Five countries voted against the resolution, which said the UN “deplores in the strongest terms the aggression by the Russian Federation against Ukraine.”

Harman also mentioned the threat of nuclear proliferation by countries like Iran and Saudi Arabia, and the lack of international norms around cyber. “How scared do you want to be?” she asked. Nye echoed Flournoy’s sentiment that climate change is a long-term threat, but that it is not at the forefront of the public’s mind.

“When you poll people, and you ask them how much of a problem is climate… it sort-of ranks number 17,” he said.

Ernst called on the United States to focus more on South and Central America, saying that if we did not engage “our own backyard” it would be “a free for all between the Russians and the Chinese.”

Former Secretary of Defense Mark Esper noted the country can “only do so much,” and prioritizing is important. “For me, it would be China number one and Russia number two,” he said, adding that issues “occurring here in the country” are not being talked about enough.

Nye also added that cyber and space will be increasingly important. “There are a lot of things of that sort that aren’t on the front page, but are very important,” he said.

Ernst called on the United States to focus more on South and Central America, saying that if we did not engage “our own backyard” it would be “a free for all between the Russians and the Chinese.”

Former Secretary of Defense Mark Esper noted the country can “only do so much,” and prioritizing is important. “For me, it would be China number one and Russia number two,” he said, adding that issues “occurring here in the country” are not being talked about enough.

“We have extreme political partisanship from both sides that is causing dysfunction in Washington, D.C., and as a result, we’re not dealing with an exploding national debt,” he added. “Our government just needs to move more effectively, more efficiently, if we’re going to deal with the threats and challenges we face in this century.”