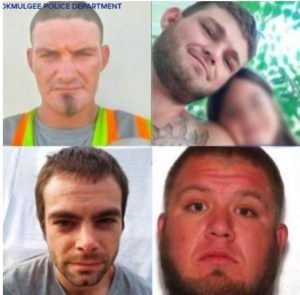 Oct. 17 (UPI) — The search for four missing men, bicycling in rural Oklahoma, is now a murder investigation after their dismembered bodies were found in a river 40 miles south of Tulsa, according to police.

Okmulgee Police said Monday the bodies have been positively identified as Mark Chastian, 32; Billy Chastain, 30; Mike Sparks, 32; and Alex Stevens, 29. The four friends were reported missing by relatives last week after they were last seen riding their bikes on Oct. 9.

“Although the official cause and manner of death is still pending, each victim suffered gunshot wounds,” Okmulgee Police Chief Joe Prentice said at a news conference Monday.

“All four bodies were dismembered before being placed in the Deep Fork River, about 40 miles south of Tulsa, and that is what caused difficulty in determining identities and that’s why it took so long.”

“I’ve worked over 80 murders in my career. I have worked murders involving multiple victims. I have worked dismemberments, but this case involves the highest number of victims, and it’s a very violent event,” Prentice said.

Police have not found the bikes or the gun used in the killings.

Prentice said a tipster told police that the four men had “planned to commit a crime” before they were “violently” murdered at a nearby scrapyard. Investigators do not know what their specific plan was or if it had anything to do with their murder.

While police say they do not have a suspect or motive, the owner of the scrapyard where the men were shot and dismembered is considered a person of interest. The man, who owns the scrapyard, has been missing since Saturday and may be suicidal, Prentice said.

In an update on facebook Monday afternoon, Prentice said the scrapyard owner’s blue PT Cruiser had been located and was in police custody. It had been “abandoned behind a business in Morris, Okla. Investigators are looking into how it came to be there.”