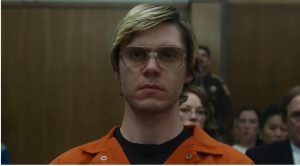 Since its release on Sept. 21, Ryan Murphy‘s Dahmerseries has drawn backlash from both viewers and families of the victims. Now, a production assistant on the show is opening up about her negative experience on set.

Last month, Kim Alsup tweeted that she was “treated horribly” while filming Monster: The Jeffrey Dahmer Story, which stars Evan Peters as the convicted serial killer, who violently murdered 17 men and boys from 1978 to 1991. She also said she was often mistaken for another colleague.

“I worked on this project and I was 1 of 2 Black people on the crew and they kept calling me her name,” she wrote. “We both had braids. She was dark skin and 5’10. I’m 5’5. Working on this took everything I had as I was treated horribly. I look at the Black female lead differently now too.” (Alsup has since made her Twitter account private.)

Alsup recently said she has yet to watch the show because of the awful memories she has attached to it. “I don’t want to have these PTSD types of situations,” she told theLos Angeles Times in a new interview. “The trailer itself gave me PTSD, which is why I ended up writing that tweet and I didn’t think that anybody was going to read.”

Slamming the series as “one of the worst shows” she’s ever worked on as a person of color, Alsup also alleged that there were no mental health coordinators available on set. She added, “I was always being called someone else’s name, the only other Black girl who looked nothing like me, and I learned the names for 300 background extras.”

Alsup noted that workplace conditions did get better while filming the show’s sixth episode, which was written by Janet Mock and directed by Paris Barclay, who are both people of color. However, Alsup said that, overall, she found the experience “exhausting.”

Alsup and representatives for Netflix did not immediately respond to EW’s requests for comment. Alsup is not the only one who has condemned the adaptation. In an essay for Insider, Rita Isbell — who is the sister of Errol Lindsey, one of Dahmer’s victims — wrote that she was “never contacted about the show” before its release, even though it recreates her emotional 1992 victim impact statement to Dahmer in one episode.

Viewers have also criticized Netflix’s decision to tag Dahmer as an LGBTQ series on the streaming service, with one fan saying it was “not the representation we’re looking for.” The tag has since been removed.