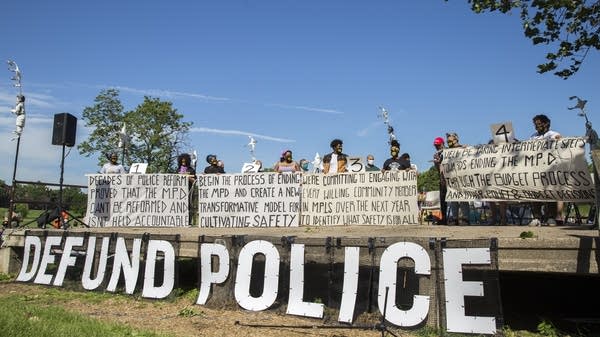 The show of support from nine council members came at a rally at Powderhorn Park calling for defunding of the department, in the wake of the May 25 killing of George Floyd while in police custody.

The council members said past efforts to reform the department have failed, so they are not going to try and implement new training policies or civilian oversight.

One For The History Books: 14.7% Unemployment, 20.5 Million Jobs Wiped Away

One For The History Books: 14.7% Unemployment, 20.5 Million Jobs Wiped Away

May 8, 2020 • U.S. employers shed a record number of jobs in April, as the unemployment rate climbed to the highest since the Great Depression. The coronavirus crisis has locked down much of the economy.

The Labor Department delivered a historically bad employment report Friday, showing 20.5 million jobs lost last month as the nation locked down against the coronavirus. The jobless rate soared to 14.7% — the highest level since the Great Depression.

Are Philadelphia Adult Novelties and Pornography Stores Essential Or Do They just Get Away With Breaking The Law As Always?

In the writers view

Across the country and around the world many businesses are struggling to stay afloat that offer needed services and products to our citizens. Many of these stores are currently closed because they are not essential.

Some of these businesses that are not allowed to physically be open in Pennsylvania are: Construction, Much of the Manufacturing has been effected, Auto Dealerships. Apparel, Furniture & Home Furnishings, Shoe stores, Jewelry, Sporting, Hobby, Book, Music, Florists, Attorney’s & Legal. Even Financial and Real Estate, Schools and Religious buildings.

When did it become essential to have devices and material to sexually pleasure yourself and others but buying a new pair of shoes or pants, going to the dentist become nonessential?

As always these stores get away with breaking laws and getting special treatment and our government and politicians are the ones to blame. They repeatedly broken rules since and before the HIV Epidemic and continue through the COVID-19 (Coronavirus) Pandemic.

With all of the news and media reporting the same exact news everyday lines at the food stores and the number of COVID-19 cases and deaths. Why do they not also report the real facts that are going on like these stores being allowed to stay open to spread the decease and pro long this pandemic.

I believe those parents.

Many mothers and fathers strive to give their sons and daughters a childhood defined by innocence, and one in which they can simply enjoy the simple things in life without having their small minds clouded with information about the omnipresent digital content that is not adult so much as evil.

The organization hunts on popular social media outlets like Tik Tok, Twitch, Snapchat, Periscope, and so many others—using models and videos as bait to lure innocent kids into their sadistic clutches. Some of these sites and apps have inadequate protections for scrollin

It is an ugly and awful fact of the culture we now live in that discussions which were unnecessary a few decades ago are absolutely necessary now. Yes, they are.

Jonathon’s new podcast, The Van Maren Show, is dedicated to telling the stories of the pro-life and pro-family movement. In his latest episode, Marvin Olasky, editor-in-chief of WORLD magazine and author of pro-life books, discusses the true history of the pro-life movement and what it can teach us about winning the culture war. Olasky points to the long history of abortion before Roe v. Wade to highlight the fact that fighting abortion on a strictly legal front will only get us so far since it is truly a cultural issue.

Patrick Trueman, NCOSE This email address is being protected from spambots. You need JavaScript enabled to view it. via e2ma.net

You’ve heard the tragic stories of men, women, and children who have been abused and harmed by the current culture of rampant sexual exploitation.

But did you know that in these uncertain and confusing times of the COVID-19 pandemic gripping our nation and the larger global community, the threat of exploitation looms even larger?

I just heard a tragic story of a young boy who I will call Leo. That is not his real name but he and his story are very real. Leo was just 16-years-old when he was groomed and trafficked through what seemed like an innocent online video game system, one used by millions of American children. He wanted to connect with other players, and when the man who reached out to him acted like his friend, it seemed to both Leo and his parents to be just another way to talk to friends on the Internet.

But the reality was far worse! Men like Leo’s trafficker use and abuse mainstream platforms with children, like video games and other social media, in order to locate and abuse vulnerable victims.

When Leo decided to meet up with his online “friend,” traveling across state lines, he was shocked to discover the person on the other side of the screen was no friend, but rather a group of seven grown men who then trafficked and exploited the young boy.

Leo was used as a sex slave for over a year, trapped in a filthy trailer while the men spent their time trying to lure other victims. It wasn’t until another 17-year-old boy arrived, also groomed and lured through the video game platform, that Leo was finally released from his prison. The men were arrested for sex trafficking, but Leo’s life has been scarred forever from his experience.

It’s no secret or surprise that stories like Leo’s are happening all across the country. And thanks to supporters like you, the National Center on Sexual Exploitation has focused on the policies, education, and advocacy to bring awareness and solutions to these very issues.

These have been very successful projects in raising awareness, but tragedies like the one that happened to Leo are still occurring.

We know you care about not only helping boys like Leo as they recover from their abuse, but also about preventing future victims.

Our child protection projects urgently need funding right now not only because we are running short of cash for them but, as importantly, because these projects are gaining so much momentum. We are changing the big companies that rely on our children for their success by convincing them to beef up their child-protection measures. I’m talking about companies like Instagram, TikTok, Snapchat and others that millions of children access every day.

Will you help us stop this scourge of online danger with a monthly donation?

Every amount can be used to make a big difference right now. We'll turn your monthly donation, whatever you can afford, into advocacy with legislators and corporate executives as well as a means for getting crucial information and resources into the hands of parents so they can protect their children.

With children online more than ever during this period of social isolation and distance, the threat of online sexual exploitation is more pressing now than ever.